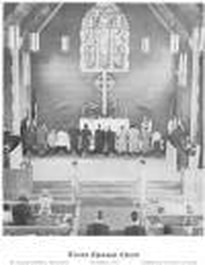 Trinity Episcopal Church had it's beginning in 1917. Dr. and Mrs. Fred Thompson had moved into the area the year before to find there wasn't a church for miles around that wasn't Roman Catholic.


With Trinity the only Protestant Church in the community it soon became apparent that an adequate church building would be needed. Arrangements were made to purchase the corner lot on the corner of Jefferson and Lake Boulevard and an old one-room school house was purchased and moved to its present location facing Lake Boulevard. It was so located because members of Trinity felt sure that in a few years a permanent structure would be built facing Jefferson.


The mission continued to grow and on March 30, 1919, Bishop Williams confirmed a class of fifteen. Included in the class was one family of parents and three children taken into the Episcopal Church. This pattern was repeated in the following confirmation classes where often were found several members in a family being confirmed at the same time.


In this manner the Mission carried on until October, 1951, when the Reverend William Kinder was appointed to take up the duties of the Vicar of Trinity Mission and to be in charge of the new St. James, Mission in Roseville. It was during Mr. Kinder's residence of two years that the parish hall was added to the original school building. Some of the cost of the addition was met by donations made by members and friends of the Church. The men and boys performed much of the actual labor under the direction of a skilled carpenter. "The Community Club" was organized and held dinner meetings in the basement of the parish hall. This group, composed of members of the Church and non-members, become very active in civic affairs, As many as 250 persons were served at these meetings. It is largely due to the energy of this group that St. Clair Shores was incorporated as a village and so named


In spite of financial difficulties in depression years, by 1934 a gain in Church attendance was reported and as the twentieth anniversary approached, the parish was looking to the time when it could claim the rights and privileges of an independent parish.


By the fall 1945, the Diocese recognized the need of Trinity Mission to maintain itself as a true parish. On October 30th of that year, Trinity Parish, Village of St. Clair Shores, was incorporated in accordance with the laws of the State of Michigan for the first time in its history the members were allowed to elect a vestry and assume full responsibility for the parish.


During the year to come, the congregation grew. the old building proved unsatisfactory, the nave was to small to accommodate the congregation and the Church School was trying to function with two or three classes meeting in one room.


A "New Church Building Committee", under the general chairmanship of Earle Richards, was appointed and investigation into the possibility of financing and a study of architectural design and building materials for a new church was begun. Special parish meeting were held. A campaign to raise the necessary funds was launched and a contract with the builders was signed. Groundbreaking services were held Thanksgiving Day, 1954, at which Dean George Merrifield of the Eastside Convocation presided. Finally, the new Church, dedicated on October 30, 1955, became a house of worship worthy of the vision of it's founders.

Our Stained Glass Windows are on the historical register. Click on any of them to be taken to the Michigan State Stained Glass Census Page. 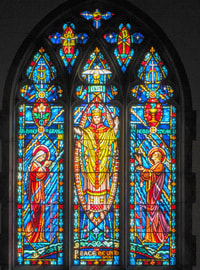 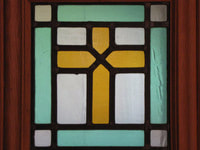